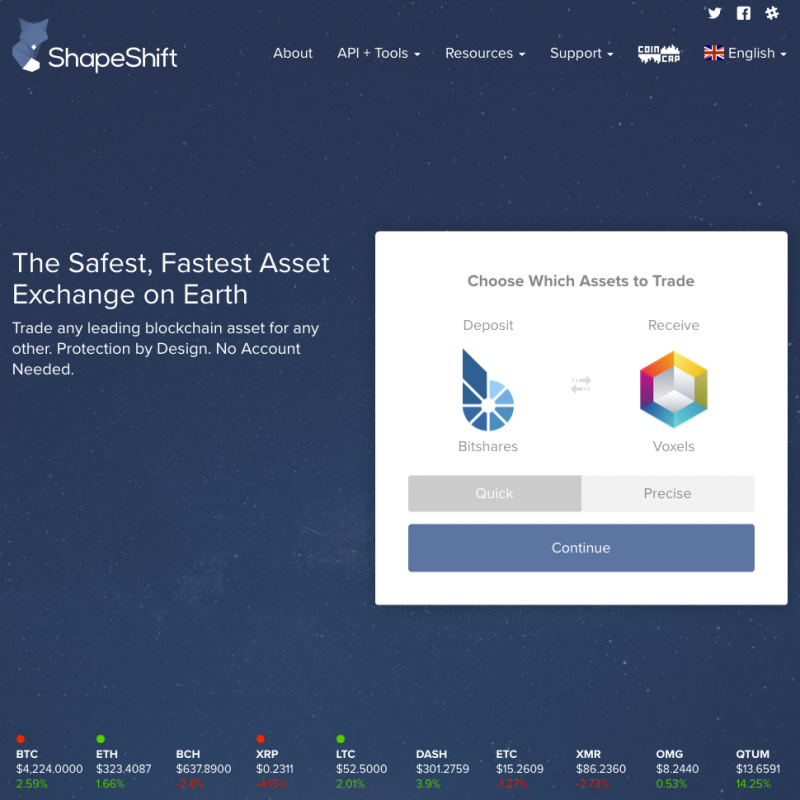 WHAT THEY DO: ShapeShift is a web and API platform which provides near-instant Bitcoin and altcoin conversion with the maximum level of consumer protection and efficiency.  Basically, you can easily exchange from one coin to another using this service.

WHY IT MATTERS: Users don’t have to create accounts or provide private personal information to use the service. Funds are deposited only once the transaction has been defined and engaged. This keeps users safe from identity or financial theft – a critical improvement in cryptocurrency exchange technology. The company has a strict “No Fiat” policy, meaning it does not use banks or national/government-backed currencies anywhere in its operations.

HOW IT IS USED: From start to finish, ShapeShift can exchange coins in less than ten seconds with no account required. The exchange rate shown is exactly what you’ll receive minus the “miner fee” (typically below $1, except for Bitcoin). There are no other fees. ShapeShift makes money by taking the spread (the difference between the price to buy the coin and the price the coin will sell for at the point in time of the transaction) on the actual exchange of the coin – typically around 50 basis points (0.5%) per transaction.

In May of this year, ShapeShift announced a new product they are developing, called Prism, which allows users to get exposure to various coins without holding them directly. The product works via smart contract, whereby the user puts up collateral in the form of a coin they own to track the value of the target coins. From ShapeShift:

An example: Sarah is bullish on privacy-centric digital assets and wants to easily and safely invest $5,000 in them.

By setting up the Prism, Sarah didn’t need to find a trustworthy or convenient wallet for each coin. Other than Ethereum, she didn’t need to sync anything or manage disparate keys. The entire process from first idea to instantiated contract takes Sarah five minutes. Most importantly, Prism allowed Sarah to avoid leaving funds at an exchange.  Her collateral was held in a smart contract which may only be withdrawn to her pre-stated Ethereum account.

WHO USES IT: Anyone who owns cryptocurrencies

CURRENCY OF CHOICE: Bitcoin and over 60 other altcoins.

BACKSTORY: Erik Voorhees found himself frustrated with the thought of wasting an entire afternoon setting up an account on a cryptocurrency  exchange to buy various coins. To make the process easier, he founded the near-instant crypto exchange platform ShapeShift.io in 2014 under a pseudonym. With the launch of ShapeShift’s iOS app in June 2015—the first iOS cryptocurrency trading app in the App Store—users began to exchange Bitcoin and 60+ other digital currencies with just a tap of their iPhones.

THE NUMBERS: 60+: Number of digital currencies exchanged on ShapeShift.

SWOONWORTHY: ShapeShift makes digital currency conversions easy because it’s essentially anonymous and near-instant. They are the only service doing coin exchanges in this manner. The other choices require going to a more traditional exchange, creating an account, sending Bitcoin (or, in some instances, a few other major coins) to the wallet within your account at the exchange, and then placing a bid to sell your coins for your desired altcoin.

QUOTEWORTHY: “Economists and journalists often get caught up in this question: Why does Bitcoin have value? And the answer is very easy. Because it is useful and scarce.” – Erik Voorhees

BLOCKINTEL’S TAKE: The traditional exchange process is fraught with risk as users are forced to tie up their assets in the exchange’s infrastructure. Users are beholden to the security procedures of the exchange, and as we’ve seen before, exchanges are targets for both hackers and government regulators. Coins should be held in exchange-controlled wallets sparingly. ShapeShift offers a means to avoid this risk altogether.

However, use of ShapeShift’s system is not without cost or risk. ShapeShift uses data from undisclosed sources for exchange rates with limited visibility as compared to traditional exchanges, requiring the user to trust both ShapeShift’s data and their exchange rates when conducting a transaction. The miners’ fees currently charged are higher than other exchange options, particularly in the case of Bitcoin. In addition, users of ShapeShift’s system are beholden to the system’s coin selection limitations, as it handles just 60+ of the more than 1,000 coins traded among exchanges around the world.

ShapeShift provides a useful and convenient service to reduce (but not entirely eliminate) the need and risk of using traditional exchanges for a limited set of coin conversions.